A Lazy Sunday Morning in Bolivia 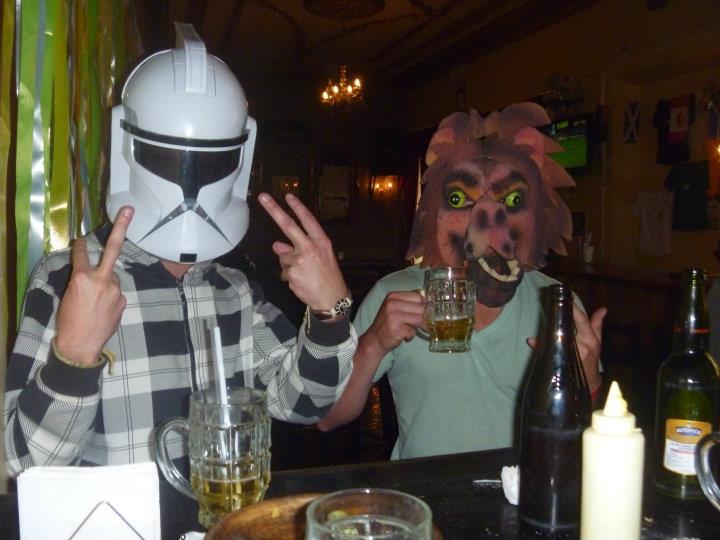 It is a good spot - a wide bend in the river away from the overhanging jungle and a weak current underneath. A toucan is perched on a branch high overhead and parrots screech as they glide across the blue sky. Out in the sun it’s hot; a sticky and humid tropical heat that makes the brown river water appealing. I just can’t help but think about the piranhas we were just catching upstream and the snakes that had been spotted in the thick mud on the banks. As far as I’m aware piranhas use their sharp, pointy teeth to eat the flesh of any living creature in the water. By fishing them we have proven they exist, and are possibly pissed off.

Now there are a dozen sets of eyes looking at me for confirmation to jump in the water. It’s easy for me to forget I’m a tour guide here myself. I’m just as foreign here as all these people looking at me for leadership. Antonio, the other guide – the real one, has lived in the Orinoco Delta for most of his life and with an athletic backflip off the side of the boat he splashes in the water. I reluctantly follow; better to get nibbled at by some angry fish than show indecision to a group of German families. 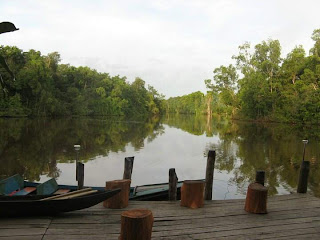 Venezuela has done its best to remain tourist free in the face of the South American backpacker boom. There is a gringo trail that swings from Colombia down to Brazil but avoids the crown at the continents northern peak. A ridiculous exchange rate at banks and a questionable government run by a whacky dictator has deterred the skimping, unwashed, hessian wearing travellers found in run down hostels throughout the world. But, strangely, this region has found its niche market in (mostly German) European families on their summer breaks. The purpose of the lodge is to bring money into the region which is dispersed among the locals so they don’t have to resort to ecologically harmful practices like wildlife smuggling or deforestation. Natives visit the lodge with fish and mud crabs they have caught themselves and exchange them for rice and flour or cash that can go towards medicine.

The Orinoco Delta in eastern Venezuela sits largely unnoticed and ignored, dwarfed by the ecologically fashionable Amazon further south. Little attention is given to this hot, green area of permanent wetlands and swamp.

But here I am, volunteering at one of the few lodges deep within the delta, working alongside the native Warao Indians. It took two days to get there from the capital, Caracas, via buses, a taxi and a boat ride from the nearest town.

‘Vill it be save to svim here?’ one of the German fathers asked me.

Instead of having to explain any details about the tidal river and the movements of its inhabitants I just de-shirt and plunge in nervously. Others follow for an anxious and leisurely swim. Fortunately nobody attracts any bite marks.

The previous night I had to attend to one of the families’ riverside cabins because there was a spider on the thatched wall. Usually a shoe or a phone book would provide a solution but there are no phone books in the jungle, and this spider was the size of my hand. I figured one of the Warao would be an expert in such a situation so I called for Nano, one of the camps staff who had lived his whole life in the delta and had surely dealt with such matters before. Unfortunately he hid behind me when he saw it, more scared than I was. We had to resort to throwing objects at it from afar until it scurried down the wall and out of sight. The Warao still practice many traditions as their ancestors did hundreds of years ago. They still live by the water, travel along the rivers in hand-carved canoes and fish and hunt with primitive tools. Western culture, however, has managed to domesticate them just enough to render them utterly useless in trivial matters such as dealing with a mammoth spider in a hut.
‘Once they leave, they never come back,’ I tell the father.
Spiders weren’t the only threat at the Orinoco Eco Lodge. The entire facility is built on stumps and decking directly over the swamp. The rooms and outer deck are under thatched palm frond roofs, hanging over the tidal river which when up, makes the whole place only inches above the water. Guests fall asleep each night to the sounds of the surrounding jungle; of howler monkeys screaming in the distant trees above and caimans splashing in the water below. Occasionally a snake would find its way onto the decking, or post itself on a branch next to the toilet block. Vicious, aggressive birds visited the dining hall at dinner time to demand a free meal and the resident duck nipped at feet under tables. One of the larger camps I visited had a caged puma for show. They used to have an alligator as well until the puma killed it. Seems nothing’s safe in the Orinoco. ‘At full moon there are more mosquitos, twice as many!’ Victor, the camp’s host, tells me. Sure there is, I mutter to myself
Come the next full moon there is an ocean of mosquitos buzzing around my head as I try to do the washing up in the kitchen. On normal nights when the mosquitos come out we usually cover up with shirts and pants to protect ourselves from them, at full moon it’s unbearable. Guests flail their arms about like maniacs before going to bed early, diving under the nets carefully to keep them all out.
‘Don’t worry,’ says Victor, ‘there is no malaria here.’

‘Has a doctor been here?’

‘No. But I’m pretty sure there is no malaria.’

Even the Warao can be a nuisance, particularly when one paddles home one-handed with a six-foot anaconda wrapped around his other arm as a misguided surprise for the guests. He plonks it on the dining hall floor for all to see. I assumed there’d be some health and safety issues about leaving a six-foot anaconda in a room with 20 English schoolchildren and several German families. Seems there isn’t.

There’s a strange, tense standoff as the guests form a wide circle around the coiled serpent, each side waiting for the other one to move while the Warao wanders off for a bathroom break and makes it someone else’s responsibility.

The standoff reaches boiling point when the lodge’s dog arrives to see what all the fuss is about and doesn’t realise the pile of ropes it’s now sitting next to is alive and could possibly give it a long, gruesome death. Half the audience will the anaconda on in a perverse way, wanting to see a National Geographic-style feeding up-close. The other half wills the stupid dog away, but nobody takes charge. As the anaconda’s head starts to move sideways and its tongue starts searching for dinner the Warao reappears and with one fluid motion bags the creature in a potato sack and hangs it on a post, saving it for entertainment at a later time. 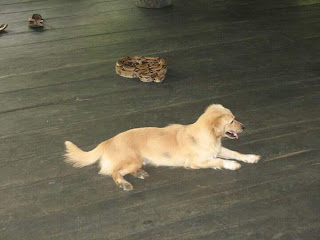 The Warao have been here forever, the odd trip in to the closest town is the furthest they’ve been into modern civilisation. The town, consisting of two grocery shops and a pool hall, is the only time they’ve ever seen a television or a refrigerator. My guidebook says there are 20,000 Warao still mostly living in the Orinoco Delta. I tell this stat to Joavan, one of the Warao staff, while we’re sitting alone on the decking. He turns around to look at the deserted river behind him and shrugs, the stat is completely irrelevant to him, he’s only ever visited his neighbours.

Each night when the guests crawl into their net-covered double beds in their novelty waterside cabins, the Warao hang their hammocks around the dining hall before rising early to paddle the podgy, gawking tourists on a dawn wildlife spotting trip. Every day is the same for them and they are perfectly content with it.

For over seven weeks this was the routine at the Orinoco Eco Lodge. The monotony of laundry, kitchen duties and river tours broken up by briefly terrifying and exciting encounters with the native fauna, or the physically punishing duty of collecting and chopping firewood in the heat. No internet or televisions or newspapers, the generator was switched on from 6 pm to 8 pm every night but that was just for light in the kitchen and for guests to charge their iPods. I could have stayed forever. The authorities never visited so my expired passport wouldn’t be a problem, there is always enough food and the steady trickle of guests is enough to keep the camp viable with room to feed volunteers.

But in the end, seven weeks was enough. The final morning we’re up at sunrise to start the long trip back to Caracas and beyond. At this hour as we emerge from the delta’s estuaries to the much wider Orinoco River where birds fill the skies that have turned a mixture of orange and purple and other colours I’ve never seen before. Along the banks Warao are already rising from their waterside huts, paddling their home made canoes out onto the water for another day of life in the delta. 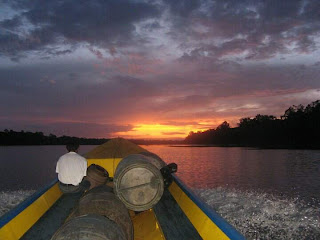 Posted by Simeon Davies at 22:51 No comments: